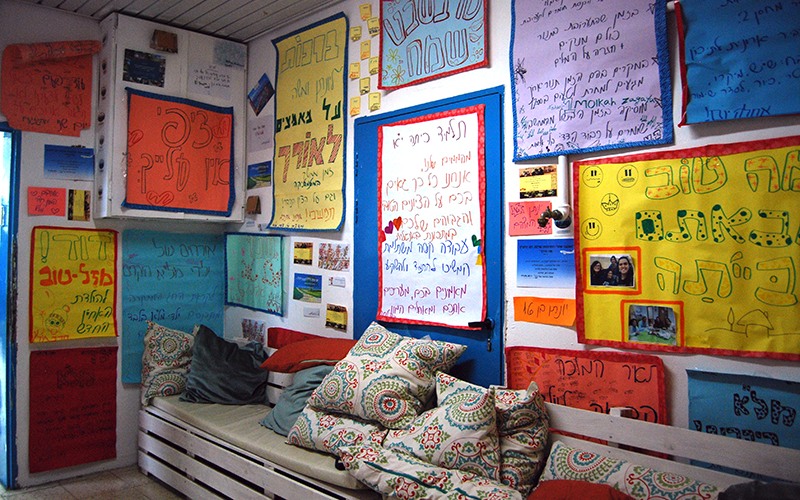 Excitement is in the air, smart clothes, fresh fragrances, pupils standing erect in white shirts, with yarmulkes on their heads, most of them of Ethiopian origin. They stride along the path. Alongside them, soldiers, parents, siblings, teachers, the principal… They slowly gather in the schoolyard of the Amit Dvir state-religious school for boys in the town of Beit Shemesh, and from there they all walk together towards the gathering.

At the entrance to the hall, we meet a young woman who is smiling, bursting with energy, her blue eyes sparkling.  Her name is Tzippi. She has put a lot of effort into preparing for this evening. She underwent a personal process of creating a project, coping with difficulties, sweat and tears. Now her eyes radiate with joy. She welcomes everyone with a broad smile, asking the parents and pupils how they are, giving her staff final instructions for the evening. In just a moment it will all begin….

Tzippi is one of hundreds of “pioneers” that the IDE has trained to work as an educational leader at a school in the country’s social-geographical periphery; a high-quality young teacher, who sees her profession as a calling, a means to effect social change and enable social mobility.  She has been working here for four years and has managed to dream about and establish MLA – an alternative learning center – which began with 6 pupils and now has dozens. 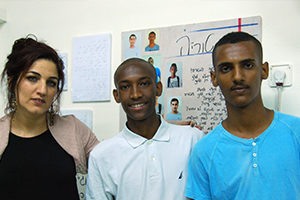 Zippi and two of the pupils from her program in school 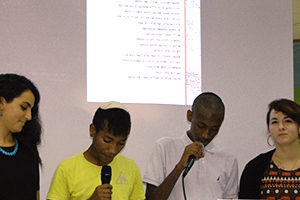 The pupils presenting the special program from their own experience

At the Center, the pupils learn in small groups in a manner that suits them, using innovative methods that identify their inner strengths and loci of attribution to help each one advance at his own pace in the core subjects of mathematics, English, history, oral law etc. These are all students who were all on the verge of dropping out of the education system.

However, this project actually began with art. At first it was artwork put up on the classroom windows. Each pupil defined his own “I”, and only later moved on beyond personal dreams towards the future, until the posters were filled with color and there was no space left on these self-portraits.

And this year, three of the graduates successfully completed their matriculation exams.

Among Tzippi’s staff are other subject teachers, and young people who have chosen to do their year of civilian national service here, one of whom had even finished her service, enlisted in the army and then returned to the Learning Center to continue working there. These young adutls are highly motivated, optimistic, have a socially-oriented worldview – as beautiful on the inside as they are on the outside.

The graduation ceremony was especially moving. Within minutes, the school’s Beit Midrash became a festive hall, with dozens of excited parents and family members, philanthropic partners, the school rabbi, the principal, the teaching staff, members of the IDE, volunteers, and most important of all – dozens of proud youngsters, shyly squirming in their seats every time their achievements were mentioned or they appeared in the video shown to the audience.

This year, they told us at the start of the ceremony, the boys were fully involved, and indeed, one after the other, they came up onstage and read excerpts from their final papers, about their learning experiences, what it gave them, and what they feel equipped with as they set out in life.

There was even something amusing, a universal aspect that is typical of adolescents, no matter where they come from, which country, social class or learning ability – they swallow their words and sentences, they giggle, they talk among themselves in a language only they understand. Most of them have a haircut I know well, also from my own son at home – a Mohawk-like crest of hair with shaven sides. I felt a tremendous unity and fellowship among them, a shared destiny, and who am I to be part of this? – I came as a bystander, to watch from the sidelines.

Nevertheless, at the end of the evening, there wasn’t a dry eye in the room, mine included.

Before our eyes, on the screen opposite and on the benches at the front of the room, we watched a group of boys who had managed to realize their dreams, spread their wings, overcome the seemingly impossible. This amazing project challenged them, body and soul, whether it was the outdoor survival course, during which they had to work as a team, cook for themselves, climb up mountains and look for solutions, or sing in English in a manner closest to their world, or conduct interviews with people about the meaning of faith (whether I choose to be a believing Jew halachically or spiritually), or the slow study of mathematics which used to be something inconceivable, or the history stories that took on a personal nature. 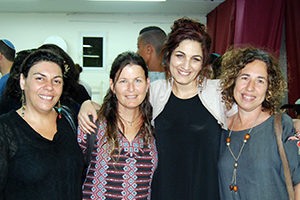 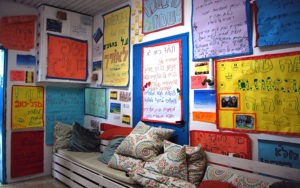 We saw how these boys changed from being awkward as they sought their way, to young men with opinions and horizons. We saw how the Center had provided them with support and comfort in difficult times, and how they confronted their difficulties and overcame them. The Center’s Hebrew acronym – MLA – is also the root of the word “full”, and here it certainly took on the meaning of a richly filled spirit, of making something whole, of taking former problems and offering just the right solution. I came out of there astonished.

And now – a few words about the Pioneer project:

The Educational Pioneer project identifies and trains high-quality educators for management and leadership roles in schools in Israel.  In this program, we choose young teachers with an entrepreneurial spirit and a high level of social awareness, who are driven by a sense of mission and who will work to strengthen schools in the social and geographical periphery of the country to position them as groundbreaking schools. The program trains these “pioneers” over a five-year period both in professional development and in the formulation of an educational vision. At the end of the process, the “pioneers” meet the threshold requirements for a tender to become a school principal.

The program caters to the intolerable situation in which some 40% of the teachers who join the education system in Israel leave within the first five years of work. Many of these have high or even outstanding profiles. This is despite the fact that every year some 1,500 new teachers join the system each year. Among the reasons for the departure of high-quality teachers is the school environment, i.e. the quality of the management; the low social image; the lack of accompaniment and the profound sense of isolation; employment conditions and working with the system; the lack of professional horizons and mobility. This is even stronger in the social and geographical periphery of Israel, where there is a serious shortage of teachers as well as significant gaps in the quality of education – the teaching staff.

The program objectives are as follows:

During the 2015-2016 school year we had 180 pioneers in 35 schools around the country who directly impacted some 13,000 pupils. 85% of the pioneers are running initiatives in the schools and 75% of them hold positions as coordinators after 3 years. Our project partners are: the Ministry of Education, foundations, local authorities and school chain owners.

Back to the newsletter
Read the next article