The Democratic Institute – Society and Education (former IDE) is an Israeli nonprofit promoting a democratic culture in Israel to create meaningful societal change. The Democratic Institute is unique in that it advocates for the advancement of democratic values within all communities that operate in the public sphere. Seeing a need for social intervention following the assassination of the late Yitzhak Rabin in 1995, The Democratic Institute became an official nonprofit in 1998. We believe that each individual has the right to live a meaningful life, express his/her own uniqueness and have an equal opportunity to fulfill self-potential, while making a difference in the lives of others.

Four basic principles of democracy embrace our work: Dialogue, Civic Participation, Mutual Responsibility, and Social Activism. The Democratic Institute works to implement these pillars in a variety of areas and communities in over 500 educational and communal institutions. Influencing thousands of children, youth, and adults, our work is in conjunction with governmental offices, local municipalities, and academic institutions in Israel and abroad. The Democratic Institute functions with transparency, honesty and integrity, allowing its 110 staff members a say and equal participation within the organization. Recently, it was recognized as a “freedom-based work organization” (the only one in the Middle East) by the international organization WorldBlu, indicating a high level of integration of democratic values, by all of its employees

Why we are unique

The Democratic Institute in Israel conducts itself as an organization with initiative and a democratic organizational culture, and develops innovative tools for initiatives within diverse communities. Our activities influence thousands of children, youth, and adults. The Institute operates with transparency, honesty, and integrity; and it espouses an optimistic and proactive world view. The Institute has a high implementation level and employs high quality talented professions. The Institute works in conjunction and closely with the public sector (governmental offices, local municipalities and academic institutions in Israel and throughout the world) and creates widely influential processes within public systems. 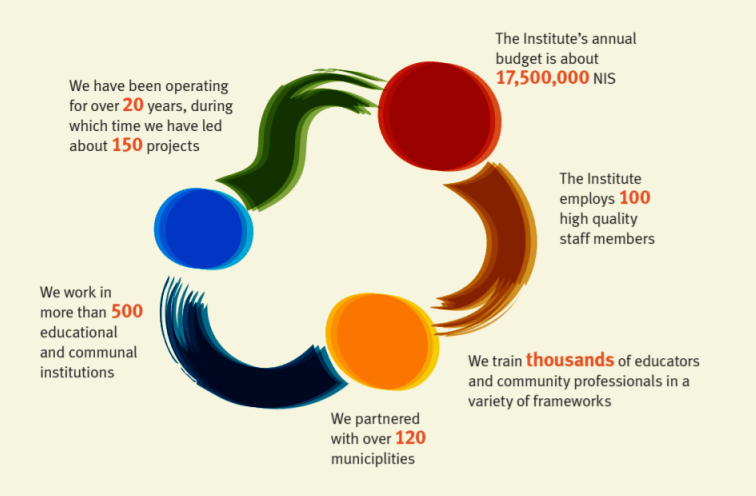 Training agents of
change to develop a
democratic awareness
and leading processes
that grow a democratic
culture, primarily in the
social and geographic
periphery of the State
of Israel.

The Institute partners
with academic
institutions in Israel
and outside of Israel
in order to create
unique learning and
research tracks.

The Democratic Institute - society and education